From  Cocoa Village we headed  up the endless Indian River passing  Titusville and the Kennedy Space Center which we had visited on our way down in the fall.
A note about the rivers and creeks that make up the Intercoastal Waterway (ICW) which we are following up the east coast.  Most of them are hundreds of yards wide, 6 feet deep and nothing up grass and a few scrub trees for as far as the eye can see. As we moved through Georgia they were interspersed with sounds off of the Atlantic that poke like fingers into the Low Country.
On Wednesday, April 26 we landed in New Smyrna Beach and had our first real "Looper" party.  We ran into two couples who were just finishing their loops.  Both had purchased boats in the Vero Beach area a couple of years ago and taken them to New York and Rhode Island where they started the loop last spring.  So technically they had "crossed their wake" though they weren't planning on celebrating till they got back to their homes.
We chatted on the dock for an hour and then headed to a great brewery for beer and more   conversation.  That led to pizza  and needless to say I didn't get the laundry done that night.  Next morning I wandered around another old Florida town trying to revive its downtown area along a river, and doing it quite nicely..Found a great re creation of the old Woolworth's stores with a soda fountain that really looked like a going concern. 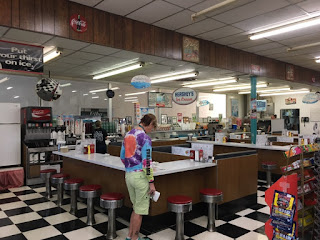 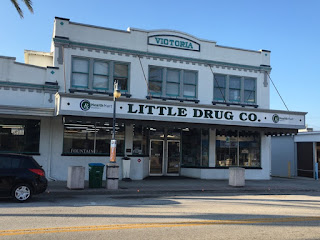