The end of the ICW

May 18, 2017
In Aligator we got the news that a bridge about thirty miles ahead was stuck in the closed position and boats were stacking up at the next marina.  We decided to keep going since there wasn’t much reason to stay in Alligator.  Did I say that since they were between owners and liquor licenses you couldn’t even get a beer there?  Fortunately we have a pretty good supply on board and we took some and went over to SevenTenths, a boat and looper that we met when we were buying Colorado Cowboy in Jacksonville.  They gave us news of the people that we bought the boat from.
A short ride got us to Coinjock on Friday.  We had reservations at one marina but the boats there were rafting together,  tying up to a boat that  was tied up to a boat that was tied to the dock.  So we went to sort of a deserted marina across the river where we could tie up.  John headed out on one of his marathon rides up a lonely highway.  He did find a farmer’s market and brought back strawberries for the boats that had helped us dock.
Saturday morning we got the news that the bridge was fixed so we got in a very long line of boats headed north. 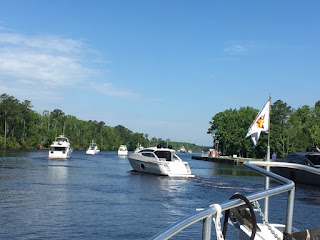 Posted by Colorado Cowboy Afloat at 9:10 AM