Oops, correction, St Augustine was Thursday, April 27.  On Friday, April 28 we stopped on
Amelia Island, our last stop in Florida.  The Island had been badly damaged by Hurricane Matthew in the fall and the marina in the downtown area was still not open so we tried the Amelia Island Yacht Basin this time.    It is really easy to dock in the closest place to the town and then just walk around and not see much else of the area.  I from previous visits I had thought this was just another cute tourist town with lots of good restaurants,  but from our dock farther south we took off on our bikes and went all around the island.  John got a little carried away and it was after dark before he got back.  I headed home earlier and still had a hard ride to beat the sunset.  The island has some very nice old neighborhoods, beach areas, and is pretty much a middle class town, with parks and schools.
The marina itself was only partly dredged out from the Hurricane and at low tide we were sitting on the bottom, but our bottom is flat so we don’t tilt too much in the mud.
Leaving in the morning we saw even more of the real life of the town.  The far north end is still industrial with a port, some kind of mill and shrimping boats.  It was really good to see that all of that could coexist together. 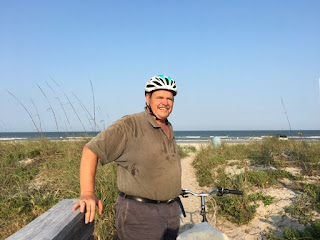 John on the beach at Amelia Island.  Atlantic ocean in the background

Posted by Colorado Cowboy Afloat at 8:25 AM