Beaufort and all about pirates

Beaufort was a perfect little marina with some very big sailboats.   We came into the dock to
See some ocean going sailboats with 100 foot masts.  Most sailboats can go to sea, like the 30 foot boat that was in the marina in Oriental, headed to England.  But these sailboat were doing it in style.    Beaufort has a good inlet to the ocean with no bridges to get under.  The controlling height on the ICW is about 65 feet of vertical clearance which is the height of the mast of a 35-40 foot sailboat.   These are highway bridge that don’t open.  All the other bridges open either on demand or on a fixed schedule.  Most sailboats have to have all the lower bridges opened.  We can get under anything over 30 feet with our antennae up and we can winch the antennae down to 16 feet if we need to.
We docked next to a nice Italian gentleman, Rene, who had come over from Turkey solo and was headed to New York.
Back to perfect little marina because it was small, easy to get into and right in downtown historic Beaufort.   I went for a walk the next morning and was delighted to see all of the old homes in pretty good shape and most of them had a plaque with information about the year they were built and the name of the original owner. 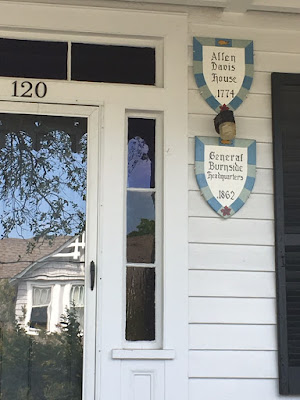 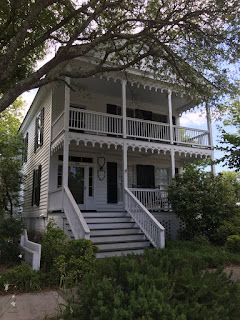 As you can see this house has had different historic owners

While John waited for a mechanic to change the oil, we have about 100 hours on the engines since Ft Meyers,  I got serious about chores. Four load of  laundry at the laundromat across the street in the General Store and provisioning.   The marina also had a courtesy car we could borrow since the Piggly Wiggly was about two miles away.  We can manage pretty well on our bikes usually but I can stock up on heavier items with a car.  Beer is a heavier item.  Did I mention that we both have discovered Yuengling beer, its really good.
Since there were a number of Loopers at the marina,  you can tell because they have a Looper burgee flying on their prow,  I decided to host a docktail.  Basically its BYOB and something to snack on, though the host boat seems to prepare a little more  stuff.

The final stop in Beaufort was their Maritime Museum  Lots of museums are sort of interesting but rarely do I find a museum that goes into depth in just a few things that I don’t really know much about and I come away having really learned something, not just been amused for an hour or so.  I don’t know whether that speaks to museums in general, or my attention span, but the Beaufort museum was really enlightening.
The Beaufort Museum had a display of a lot of artifacts that had been found in the wreck of Captain Blackbeards ship the Queen Anne's Revenge.  The exhibit did a good job of explaining the life of pirates in the early 18th century.  It also showed the early methods  developed to save people from the wrecks that inevitably occurred on the shoals as ships, both legal and illegal tried to get into the ports along the North Carolina coast.  It also described that battles against the German U boats.  In all 177 ships were sunk off the North Carolina coast in WWII.