May 4 -5, 2017
We docked at the Charleston Municipal Marina.  Huge and a little tight getting into but a short Uber ride into the downtown area.   I set out immediately to see what there was to do and see and text John about where to meet me for dinner.  That works out pretty well for us.  Checked out the Visitor Center to book a tour for the next day.  With John’s knee issues a motorized guided tour around the city is nice.  And you really get to see a lot of the city in a short time.
Found an olive oil and vinegar tasting store that also had small batch bourbon and scotch to taste.  Needless to say I succumbed to the demon and got a very nice bottle of single malt for tasting.  Then there was the King Street cookies with about 25 kinds to choose from...  I only get oatmeal raisin because they can count for a healthy breakfast.  (But no spinach or carrots)   I couldn’t resist the Swamp Fox Restaurant and Bar in the Francis Marion Hotel for dinner.  Some of my earliest TV memories are of the show Swamp Fox, outfoxing the British at every turn.  Actually Charleston is mostly about beautiful old mansions, being the first of everything in America, and FOOD.  Since the original land grant from King Charles was somewhere south of Virginia, to the Spanish in Florida to everything west, I think it was easy to claim being the first at a lot.


Friday we took our tour in the morning with a Charleston native and got the “inside scoop” on history and real estate.  The really rich people had mansions   South Of Broad Street they were SOBs and the people Slightly North of Broad St were the SNOBs.  Unfortunately now only movie stars, rock stars and billionaires can afford any of the old houses, but they are being preserved. 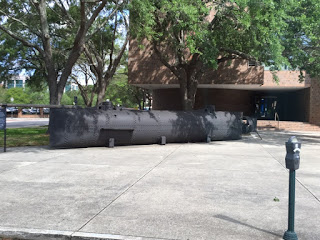 We did get some history in between food stops.  This is a replica of one of the first submarines even.  It was powered by men bicycle pedalling inside and actually torpeodoed a Union ship.  then it sank, but Clive Cussler found it on the bottom of Charleston Harbor and they have it in a museum


After the tour I decided to let John off the hook for sightseeing and shopping and he went back to the boat and I went to the Central Market where they have lots of local crafts.  The real big deal was the sweet grass baskets that the Gullah ladies weave.  They are beautiful but the prices are pretty expensive.  One person told m you’re supposed to bargain but I hate that so all I ended up with was a trivet.  But at least I’ll use that.  And the food!  I had the most amazing Pimento BLT with pimento cheese (my new favorite) fried green tomato, and Applewood smoked bacon on toasted sourdough at one of the stands in the market.  After a quick visit to the Catholic cathedral, I caught the trolley up north (about 1.5 miles) to catch my culinary food tasting tour of North Charleston.   The area is just starting to revitalize and get too expensive for the locals but again the food was amazing, seafood, calamari and mussels, BBQ, etc., etc. and finished off with ice cream.
I waddled home and sat comatose in the recliner for the rest of the evening.  Did I mention the Bloody Mary made with bacon infused vodka, with a piece of that great bacon and fancy olives? 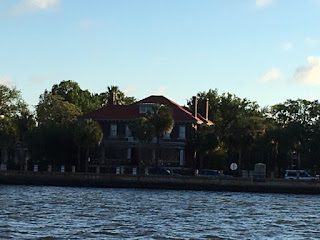 Goodbye to a beautiful city and waterfront with a very full stomach.
Posted by Colorado Cowboy Afloat at 7:31 AM