Tuesday, May 23
The weather had turned bad overnight and there were small craft advisories out but we decided to try our luck since we wouldn’t be in the Chesapeake for very long and then into the York River.  Traveling up the Elizabeth River and into the famous, or infamous Hampton Roads we saw the full naval ship yards and watched as a destroyer and an aircraft carrier pulled off their piers and followed us up the channel till they turned out to sea and we went up the Chesapeake.  Pretty cool.

The day was overcast but good boating weather and we made it to Yorktown just before a huge rainstorm hit.  I had wanted to go up the James River and recreate the feeling of the first English settlers coming into a new continent, but realized that I could save a whole day by going to Yorktown and renting a car and driving 20 miles across the peninsula created by the James and York Rivers.  I had been to Williamsburg before which has a wonderful recreation of life in colorinal Virginia, with glass blowers and cobblers and taverns and everyone dressed up, so we concentrated on the Battlefield at Yorktown where the British we finally defeated and the war ended and Jamestown.  Lots of the old trenches and earthworks are still visible on the battlefield.      The exhibits give lots of credit to the French for the victory, both their navy which beat the British and kept supplies and troops from reaching Cornwallis and Lafyette and the French troops who helped win the battle.  Of course a lot of credit goes to Washington who created an army out of volunteer militias and keep it together for 6 years.
Then we went over to Jamestown.  Since I had been there in 1967 they have done a huge amount of excavation and have a much better idea of what the town looked like.  they have been able to recreate exactly  the palisade of the fort and foundations for some of the buildings and excavated a cemetery and other burial sites under the original church. 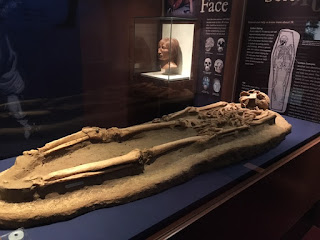 The skeleton of a teen age boy that was buried in the graveyard in Jamestown.  Note the musket ball on his right knee. Through modern forensic science they can tell how he was shot with the musket and how far away the shooter was.
Posted by Colorado Cowboy Afloat at 10:11 AM