We left Manasquan Inlet into the Atlantic early the next morning.  It was our first time in the open ocean since Florida Bay, but the weather was perfect and the seas really calm.  Our boat can handle wind and waves but it’s really uncomfortable to be rocking and rolling on the boat for 5 hours.  We had decided to stop on Staten Island at a marina for our visit to Margie and family in Brooklyn so we got into the lower New York harbor and ended up at Great Kills State Park
John and I both got bike rides in the afternoon.  I found a place to get my hair cut and groceries.  John headed north along the harbor and got up to the Verrazano Narrow Bridge.  We had decided that it was as easy to get to Brooklyn from Staten Island as from Jersey City so we rented a car the next day, and headed to Brooklyn.  First problem was that John’s Google Maps was set for bicycling and it took us to the Staten Island Ferry.  Which is strictly pedestrian.  We got turned around and headed over the bridge to Brooklyn, but is was stop and go the whole way.  The traffic is really terrible even in the outer boroughs of New York.  Seventeen miles and two hours later we got to the bike shop for our guided bike tour of Brooklyn.  Obviously late they were cool and helped us catch up to the tour.

We saw Williamsburg, north and south with the invisible line running between them, Dumbo, Brooklyn Heights and the old Navy Yard they are repurposing into lots of different new businesses, including a profitable two acre garden on one of the roofs.  There is also a nice park, bike path all along the section of the Brooklyn along the East river.  After authentic Brooklyn pizza, I wasn’t impressed, we headed across the island to Margie’s.  Another 5 miles and 45 minutes later we got to an area called Carol Gardens, because the flats are set back and have room for a little garden in front, though most people use them for storage.  Seems like parking would be a better use like in London.  We had a great visit with Margie, and Brendan and the kids.  Cecelia never cried, actually she was asleep most of the time. 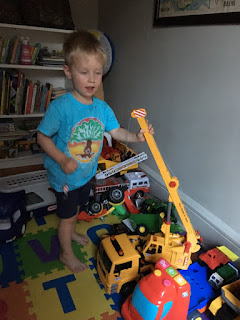 Cal is a pretty active kid.  I brought a present of Candy Land and we played it for a while, then got serious with trucks and cars and a pretty neat crane.   Take out Italian for dinner seemed perfect and we headed back to Staten Island.  That was a snap, 35 minutes at 8 pm. 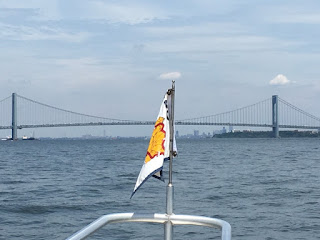 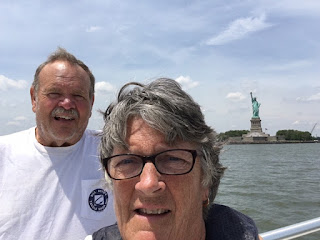 We docked at Liberty Landing in New Jersey, right next to the Liberty Landing State Park that got shut down for the 4th of July because the governor and the legislature couldn’t agree on a budget.  I had invited Lorelei Burns, a friend from high school to brunch the next morning.  I insisted that it is really fun for me to be able to put on a simple continental breakfast with croissants from a genuine French café, that I could cycle a half mile to in Jersey City.   Also stopped at a great farmers’ market in the downtown area and got fruit from a Korean store.  There are drawbacks to big cities, but a lot of nice things too. 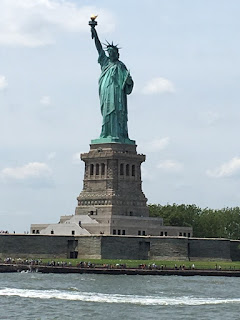 Lorelei and her husband Carl came the next morning and were visited on the boat.  They enjoyed the boat, since they had owned a live on sail boat for many years.  John doesn’t do walking around cities very well and Carl has some balance issues so we left them on the boat and Lorelei and I caught a ferry and headed into lower Manhattan.

We had lots of time to catch up and chat and went to the 9/11 memorials and the museum.  It was really well done and talking to Lorelei about it was interesting.  She was in Manhattan on 9/11 and a lot of people from the small town in New Jersey when they live were killed.  After a late lunch back at Liberty Landing we said good bye.

I had planned a totally New York day with a bike tour of central Park, a Broadway show, Beautiful, The Carol King Musical, and dinner at the most famous deli in New York, Katz.  All were great, though the deli wasn’t as good as we had expected, but the atmosphere was strictly lower east side.   And that was enough for New York for these two Colorado Cowboys.