We headed out of Chicago by locking through to the Illinois River.  The lock is to make sure the water runs to St. Louis instead of Lake Michigan.  The Army Corps of Engineers changed the flow of the river by digging it lower than the lake,  in time for the world’s expo so that the lake wouldn’t be too polluted.  Lots of very low bridges, but we made it under all of them and arrived in Joliett, tied up to the wall in the bicentennial park,  and spent a very hot afternoon in our air conditioned salon watching the start of the Fed Ex finals.  Met some other looper boats headed in the same direction for the first time since Milwaukee.
The next morning I got up early and while it was still cool walked over the Jitters Coffee shop.  The most remarkable coffee shop I have visited, right on the corner of Route 66. 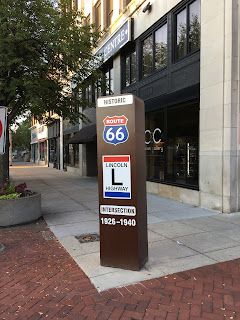 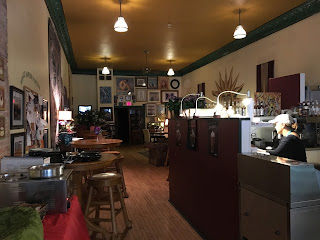 We made our first mistake on the locks in the inland river system, by leaving the wall before calling the lock to find out what was going on.  The locks on the Illinois River system operate 24/7 so they are sometimes down for maintenance.  We had a two hour wait, 10 minutes from Joliett.  We dropped anchor, but some of the other boats went back to Joliett and on my recommendations went and had breakfast at The Jitters.
The next lock also took a long time since the lockmasters give preference to the tugs and barges, so we had to wait again for a barge to catch up for us to go through.  At 4 o’clock I had had enough of locks so we pulled into a small marina above the next one.  Later I learned that the boats that had gone on down to the next lock took 4 hours to get through and finished the day in the dark, looking for the marina.

September 23, 2017
We went down early the next morning and had a lock through with a really big barge that had a little room in front for us and another boat
and we cruised into Heritage Harbor in time for nettwork coverage of the Fed Ex.  After a quick ride into town, to check out the Octoberfest we came back to the marina and had a really good dinner in the Red Dog Restaurant there.

September 24, 2017
John headed out to play golf on his bike, with his clubs on his back and I went back to the Octoberfest since they were having a Polka Mass under the tent.   Sat and chatted with a nice group of ladies and enjoyed the standing room only mass complete with accordion and lederhosen.  (Not on the priest) 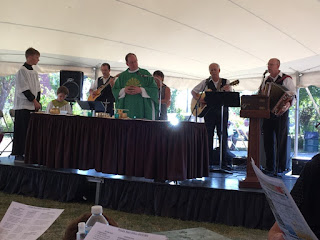 Breakfast at a unique restaurant The Pink Chihuahua and met John back at the boat for the final day of the Fed Ex.  Really sorry Paul Casey didn’t win.  We had a great briefing from the dockmaster at the marina about what to expect the rest of the way to St Louis.   After all of the rain and flooding earlier in the summer, they have had 72 days without rain and now the rivers are really low so we have to be careful where we try to anchor and ever some marinas we can’t get into.


Posted by Colorado Cowboy Afloat at 5:06 AM