Sept 17, 18, 19, 2017
Chicago.    Again a long trip though not so bumpy but we decided it was time to be finished with Lake Michigan and headed to Chicago.  It was a huge, no frills marina,  in Burnham Harbor, but the location was perfect.  Right on the Museum Campus which houses the Field Museum, the Shedd Aquarium, Soldier Field and McCormick Place, and a Lake Front bike path that runs for 18 miles north and south along  lake so it was easy to get anywhere.  Our first dinner was at a Eleven City Café where we had Latke, Krugel and pastrami sandwiches.  The next morning we had scheduled a bike tour of the near north side including the Gold Coast, Old Town and the Lincoln Park Zoo.  Bicycling 3 miles to the meeting point was easy along the lake front and our guide, Joey of Bobby’s Bike Hikes, an actor by night and a tour guide by day filled us in on a lot of the history of Chicago, including exhonorating Mrs. O’Leary’s cow.     An amazing lunch at The Purple Pig and back to the boat for naps

Next day we did a river cruise that highlighted all of the unique buildings and architectural styles of Chicago. By going down the river, we could see most of the famous buildings from a better distance than from the street.  Whoever started the Chicago fire should get a medal because to completely burned down the main part of town and allowed it to rebuild with a plan and the first true “skyscapers” in the world.  Most of which are still there since it has been less than 150 years since the fire.  Another great lunch a Bandera restaurant and John headed back to the boat and I went window shopping on the Magnificant Mile.  It really was neat to see all those famous stores in an urban setting.  I’ve seen most before, but usually in a mega mall. And the displays in the windows were fantastic.   The Orvis store was the only one that seemed to fit my lifestyle so I bought a couple things there.

Wednesday I finally went to the Field Museum since our boat was only 500 yards away.  I wasn’t looking forward to seeing a bunch of stuffed animals, but there were all sorts of interpretive exhibits that made me wish I had left more time for it.  And they had the famous man eating lion of Tsavo.  I did go look at the stuffed animals, but they made a point of saying that the specimens were all more than 50 years old and they don’t really do that anymore.  But reexamining all of the specimens that they have with new techniques and technology gives them lots of useful information about the world in general over the last 175 years. 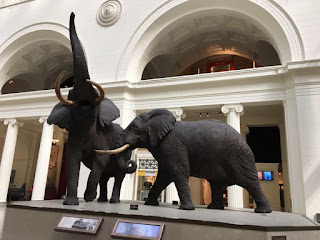 After a quick trip to Trader Joes, the closest grocery we went out for an evening on the town to celebrate my birthday.  Dinner of tapas at a neat Spanish restaurant, repertory theater, Spamilton, obviously a spoof on you know what, and a drink at the lounge at the top of the John Hancock building.  Great way to end our trip to Chicago.

Posted by Colorado Cowboy Afloat at 9:50 AM