Heading south with a golfing fool

August 24-Sept 5. 2017
Colorado, catching up with family, church gossip, kids, grandkids, golfingt buddies and friends.  Helped get signs up for the Art Dague pool initiative.  John hunted, worked and played in the Labor Day golf tournament.  But we were both ready to head back to the boat.

September 6, 2017
John waited for a mechanic to show up to change out the drinking water pump that had been overheating while I went for a nice walk up the shore.  All done when I got back and John headed down to Green Bay to visit Jeff Posey who had had surgery for a busted up leg.  I headed into Sturgeon Bay to visit the shops. There were some really nice one’s including a bookstore, a quilt shop and lots of Door county, cherry souvenirs.
Jim and Polly came up and we went to a beautiful restaurant for the Wednesday night German specials.

September 7, 2017
Polly cooked a “full Wisconsin” breakfast and we pulled in the lines and headed south.  We really feel like we have turned the corner on the trip, and not any too soon.  I was really cold.  We turned on the heater for the first time that night in Kewaunee.
Nice little town just about 25 miles south of Sturgeon Bay.  I walked into town and stopped at a cheese store and talked to the owner, a woman from the Netherlands.  It was her husband’s dream to have a small farm with some cows and make cheese like his grandmother in Holland.  And here they were.  I had a cheese tasting and decided that 18 month Gouda was really better than 3 month.  Of course I didn’t think to take here picture!
Next morning I walked into town for a latte and pastry at Anne’s coffee house, stopped at the farmers’ market for the last corn and rasberries of the season and at the Fish market for fresh

September 8, 2017
25 miles further we were in Sheboygan.  A bike ride around the town that afternoon set me up for a good day the next and the aforementioned dinner topped off a Wisconsin day.

September 9, 2017
John took off on his bicycle to find a haircut and I headed downtown for breakfast at an amazing restaurant, Field to Fork, with a map on the wall of all the source farms for the ingredients.  The highlight of town was an incredible museum, The Kohler Arts Center.  It specializes in “outsider art”  and I would have to say that the art looked like most of the artists were certifiable.  But I guess there often is a fine line between madness and genius.  No realistic oil painting here.  If fact not many paintings at all.  Most of the art was 3 D and a lot was monumental.


Some shopping at a wonderful yarn shop, kitchen store anu riding around the harbor that has been beautifully restored from its warehouse and coal loading days and back the the boat for a nap before heading out to dinner.  We decided on The Duke of Devon because it was the closest and looked interesting.  It was a gastro pub to equal anything in England!
I went to a 100 year old German church on Sunday which was one of a group of churches that had been combined.  Beautiful wood carving, a huge organ that they used, a friendly congregation with lots of young people and a priest that knew when to quit. 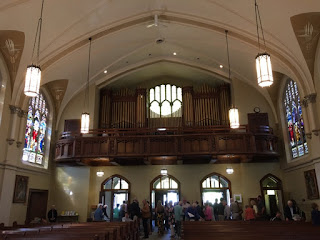 John’s knees hadn’t been feeling too good, but with the rest on the boat and the proximity to Kohler and Whistling Straits he decided they felt good enough to play.  We couldn’t play the US Open course because there are no carts allowed but we played the other links course, The Irish, which we both really liked. Our fore caddie Jordan, was great and with him telling us where it hit the ball, and lining up our putts we both played pretty well.   And John got a hole in one!!

Of course no moderation John decided that we should play the next day at the Blackwolf Run course, the Rivers, where the women play the US Open.  I really enjoyed that too, but John was feeling good enough to play the second course, the Meadows there!!  I drew the line and headed over to Bookworm Gardens which I hadn’t gotten to the day before.
It was a beautiful botanic garden set up for children and each area of the garden was themed after a children’s book with benches and chairs to sit and read the waterproof copies of the books.  The classics were there, Peter Rabbit, Charlotte’s Web and Little House on the Prairie but also lots of books I’d never heard of.   It was wonderful.   One of the neatest displays was donated by the PGA wives association and featured the book, Connor the Caddie, and a miniature Whistling Straits clubhouse complete with golf hole, sand traps and sheep.

Posted by Colorado Cowboy Afloat at 10:44 AM