Friday, August 18.2017  continued
I finished the day checking out a few gift shops and visiting a nice local maritime museum with a very friendly lady who filled me in on some of the information about the fishing and logging industry on the island.


That night  we rode our bikes out to a nice restaurant in the old rectory of the Catholic Church across from the Cemetery.  They had cut the church in half and moved it sometime in the last fifty years but the rectory had been repurposed.

Saturday August 19, 2017
The winds were dying down and it looked like we might only have on day to get across Lake Michigan before they started again.  So we set out 75 miles across the lake to Washington island, on the Door Peninsula with the somewhat calmer waters of Green Bay.  After a very long day we landed in a calm marina and I took off for a 5 miles bike ride to get the kinks out.  The marina had charcoal grilles so I made our favorite dinner, grilled rib eye, sauted mushroom and onions and green salad and some good Michigan corn.

Sunday, August 20 , 2017
After a bike ride and breakfast at the Red Cup Café we opted for the Cherry Train Tour of the Island.  The island was big enough and sparsely populated enough to be a pretty long bike ride.
Saw a nice art gallery and nature center in an old school.  Went to a beach with polished dolomite rock.  And saw farm museum and a lavender farm, and the highlight of the trip was a beautiful small chapel size log church built on the style of the old Scandanavian churches.  This Island traces it heritage to Icelanders who came here in the 19th century. 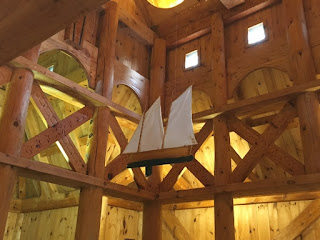 Monday, August 21, 2017
Again weather dictated our schedule and we headed out across the Gates of Death, the strait between Washington Island and the mainland of the Door Penninsula, trying to stay ahead of the weather.  We pulled In at Fish Creek just as the winds we picking up and docked without too much trouble.  I checked the local theater listings, not expecting to find much on a Monday, but there was a play out in an amphitheater in Penninsula State Park that didn’t look too far for bikes since there isn’t much Uber around here.   Got tickets and reported to John our plans for the evening, starting with dinner and a well recommended pizza place at the entrance to the park and a 6:30 show.  Dinner was light enough to cycle three miles.  I had already been out in the afternoon so we wouldn’t get lost, and we had benches with backs and cushions.   Really good play,  a comedy about Fish creek and the old lodges and a movies company looking for a setting for Oklahoma!  Actually really well done under the pines and stars of Door peninsula on Lake Michigan. 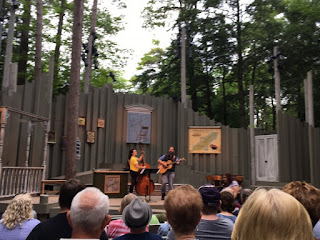 August 22, 2017
The next morning the wind was howling and it looked like we weren’t going anywhere so I headed to town to finish some of the shops.  And wonderful glass shop with garden toys would have gotten more of my money but I couldn’t figure out how to get anything home.   Being on a boat has really been good for my shopping discipline. 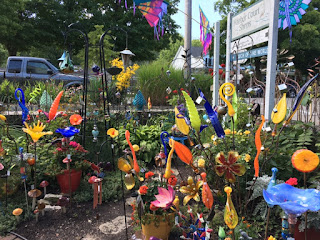 Getting back to the boat John thought the wind had died down enough to try the run to Sturgeon Bay, 25 miles away.  I wasn’t so sure, but he’s the captain, and a pretty responsible one at that,  so rocking and rolling we headed down the bay to meet our friend Jim Schauss at his dock on Sturgeon Bay.  20 miles of rocking and rolling later we were met with a welcoming committee of Don Baryenbruch, Terry Posey and Jim and threw them our lines to pull us around into Jim’s dock.
I was really glad to get off the boat and we had a great time.  I  can't believe that neither John or I got a picture of all the folks.  Karen, if you did, send it to John and I'll include it in the blog,

August 23, 2017
A lazy day visiting with friends and getting the boat ready to leave for 12 days and the next morning we headed to Colorado for the first time in 8 months.

Posted by Colorado Cowboy Afloat at 9:27 AM