On to St Louis

September 25, 2017
Headed out of Heritage Harbor, well briefed about the low water and all the marinas and anchorages we wouldn’t be able to use.  Through some great scenery in the Starved Rock State Park area and made it easily through a couple of locks.  The only place to tie up and get off the boat was the wall of an old lock in Henry.  It would have been really hard to catch something to tie to, but another boat, Salty Dog, was already there and they caught a line as we were coming in.   There was a friendly bar at the marina there and we had some beers with a Canadian family on the Loop in a small sail catamaran, Binary.


September 26, 2017
Next morning I went for a walk around a pretty sad little town that had a lot of neat old buildings mostly boarded up.
But I did find the most amazing hardware store with one old wall, about 75’ by 12’ that had old built in drawers for nuts and bolts and ladders attached to a railing on the ceiling for accessing.  The store had been in continuous use for over 100 years.
There was also a little bakery with a good latte so I was set for the day.


Headed on down the river to Peoria and landed at Illinois Valley Yacht Club, that still had enough water for our boat.  We got in early and went into Peoria to see the Caterpillar Museum and the Riverwalk museum.  The first was interesting and had some really old dozers and one really big one, but was mostly an advertisement for Caterpillar. 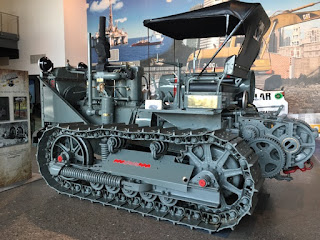 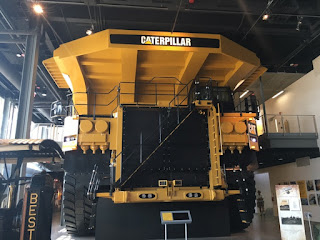 The Riverwalk museum had an interesting history of the Illinois River and the basin it is in, formed by the breaching of a land dam when the glaciers were melting about 10,000 years ago,  in the history of native Americans.  A flash flood of epic proportions.   Dinner at a avant garde restaurant downtown and we got some recommendation for good golf courses in the area from the manager who was an avid golfer.  The marina was quite a ways out of town and not too cyclist friendly so we used Uber a lot but at least its available.

September 27, 2017
Played golf at Weaver Ridge.  A really nice municipal course and we started early enough that they let us off on the back nine first and we played along without anyone in front of us and got back to the marina in time for lunch in the dining room of the Yacht Club.  It kind of looks like yacht clubs are having the same problems that private golf clubs are, but they were really friendly and looking for new members.  Unfortunately they had already closed their pool for the season, as it was still pretty hot for September.

September 28, 2017
We decided to stay in Peoria for a couple days to watch the President’s Cup.  We have to be in a marina for the boat to be still enough for the antenna to stay on track.  So that morning we gave the boat a good cleaning inside and out.  Spider season had started a few weeks earlier and these spiders drop a black gunk that is really hard to clean off the outside of the boat, and the dust was building up on the inside.  The afternoon was spent watching the US build up quite a lead in the Cup matches.

September 29,2017
Golf early at Link Creek, a much harder track and back to the boat for more golf on TV.  One of the things we have enjoyed is meeting the Uber drivers that we use.  The one that brought us back from the golf course was a woman who had played at Link Creek till her back gave out, but she was really interesting to talk to about Peoria and what is going on in the city.  She also recommended an old  German restaurant that was close to the boat, the Hof Brau House, so we went back there for a great dinner and beer.

September, 30-October 1, 2017
We got going early and decided on a long day to a tug company dock where they let us tie up to a barge.  It was pretty quite except when the tugs came in. But the TV antennae worked. The town of Logstown is only about 35 miles from Springfield and has some houses that people were fixing up and others that looked pretty run down.   Unfortunately when we get to some of the smaller towns on the weekend most of the restaurants and shops that are there are closed.  When I went into town things seemed pretty lively though, because it was Homecoming and lots of the kids were around the town square taking pictures.  At least there is usually a Catholic Church and this one was a nice little one with a Polish heritage.
There was a Spanish Mass and at the English Mass there was a large number of blacks, obviously new immigrants.  It turns out that there is a bid meant packing plant in the town and both the Hispanics and the West Africans have come for the jobs.

When I got back to the boat we had to hurry up a up to tie up the boat ond move the boat to a different barge because one of the tugs needed our spot to take on water. Unfortunately in the hurry to tie up the boat the cockpit door flipped off without our noticing and floated away durning the night.  Finished watching the rout of the internationals to end the day.

October 2, 2017
With a very long day ahead we got off through the last two locks and 70 miles later tied up to a very small dock at a restaurant in Hardin, Ill.  Decent dinner and good pie, and we knocked out pretty early.


Only a short day and we were finished with the Illinois River and entered the Mississippi.
We decided to go to St Charles, a couple miles up the Mississippi where there was a really neat downtown full of 100 year old houses that had not fallen into disrepair or been torn down that had lots of fun restaurants and shops to explore.  It was the site of the final organization of the Lewis and Clark expedition and they had a pretty good museum there and a replica of one the keel boats that they used on the trip.  John met me for dinner at Mother-in-laws Restaurant in an old Victorian house.  One of the things I had not realized before this trip, was the amazing population growth in this country in 50 years from 1800 to 1850. 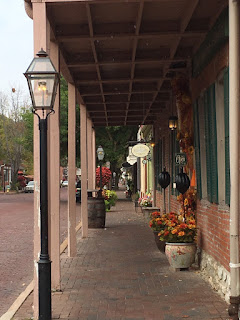 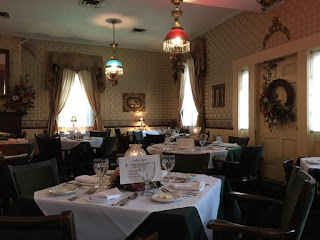 Posted by Colorado Cowboy Afloat at 7:21 AM