October 4, 2017
Again a short ride to Alton, Il. This is the best place to dock to see St Louis.  Unfortunately there are no marinas right in St Louis.  So we rented a car for two days.  We wanted to see Alex Harrison and his family and figured that St Louis had more to do with the history of our part of the country than most of the rest of the places we had visited on the trip.  I went into Alton that afternoon for a much needed haircut and to see what was around.  Another small town trying to figure out what it wants to be after the loss of the industrial jobs.
I did find a used book store whose owner was selling his own book about abolition and southwest Illinois.  The store was one of the stations on the underground railroad and I realized that I needed to learn a little more about the history of the early 19th century.  The Missouri compromise was a very real issue in this part of the country, since Illinois was theoretically a free state and Missouri, just across the river was a slave state.  St Louis and Missouri was born of the fight over slavery .  It’s no wonder they are still fighting in ways that other states aren’t.
We went to the famous Fast Eddie’s for dinner, actually fast food and lots of beer with music in a very distinctive building, originally an Anhauser Busch brewery and pub.
October 5, 2017
Went into St Louis for a full day of sightseeing and big city living.  Alton in 20 miles north of St Louis and the drive in was through numerous small town, actually suburbs that were pretty sad.  St Louis itself if only about 300,000 people, but early on small municipalities formed for people to get out of the city itself which was highly industrial.  In 1840 St Louis was much larger than Chicago and full of immigrants from all over the world.  I have been wondering what would have happened in Europe if they hadn’t been able to send hundreds of thousands of their population to American in the early 19th century.   This area exploded with people over the first half of the 19th century.
Our first stop was at the Cathedral Basillica of St Louis.  John dropped me off for noon Mass and then a tour of the church.  There is no paint in the church, built in 1905-12, and the 83,000 sq ft of mosaics took over 80 years to complete.   They are really beautiful but the most amazing part is that they are very contemporary in theme and cover the history of the church in St Louis from it’s beginnings with Father Marquette in 1770 to the 1960s and Cardinal Ritter’s battles over desegregation in St Louis.  Of course all the saints and theology are there but I have never seen a catholic church depicting current events on its walls. 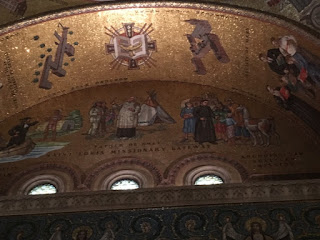 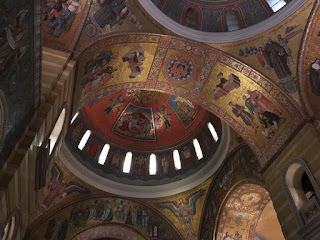 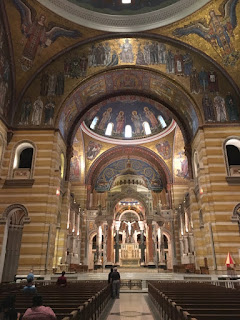 John found a trolley tour for us to take for an overview of the city.  Showed mostly a lot of Forest Park with its Zoo, Art Museum and two golf courses along with lots of trails and open space.  Then we headed to the Arch.  Sort of a bucket list kind of thing.  It was a little off putting to have a video of the historical times that the arch was built. 1960’s don’t count as history in my book.  But the technology of the tram to get to the top was totally 60’s  I felt like I was an astronaut sitting in a space capsule.  Very creepy and claustrophobic.  The view at the top was cool, but not really amazing.


For dinner the TripAdvisor recommendation was the Broadway Oyster Bar.  Another total dive with memorabilia covering every square inch of the walls, but absolutely amazing food!!! 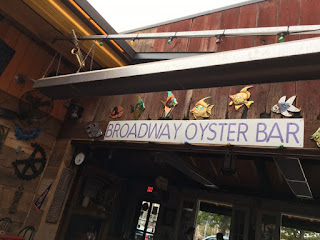 We had tickets to Bodyguard, a musical based on the movie with Whitney  Houston  in the Fabulous Fox Theater.  I always enjoy most any musical, John not so much, but the music was great and the theater and its Wurlitzer organ an experience in itself. 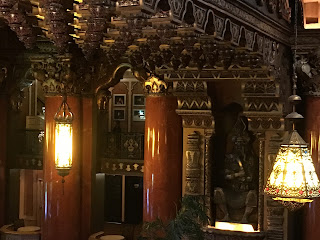 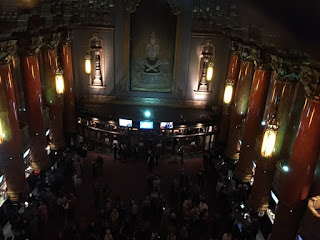 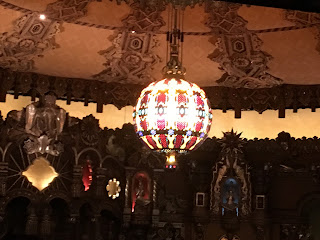 October 6, 2017
I dropped John off at a golf course, went to the grocery store to stock up and then headed  back into St Louis for a food tour of the Delmar Loop, the “happening” place in University City, the original “white flight” suburb of St Louis, just a few miles north of downtown.   Great guide who took us to 5 diverse restaurants, really fast food type places, BBQ, Seoul-Mexican fusion, Jordanian middle east, pizza, amazing Italian bakery and Fitz’s Root beer, starting at the Chuck Berry statue across from the Bluberry Hill bar and restaurant.  And an interesting commentary on some of the history of the area.

No need for dinner after that, though I went back to the Salt and Smoke and got some ribs for John.

October 7, 2017
Alex Harrison and his son Arlo came for a visit to the boat.   A little shy at first Arlo (2 yrs old)
Arlo was soon running around the boat with Sally following.  Even with a life jacket on, I really didn’t want him falling in the water.   It was nice to catch up with Alex.  It is always fun to talk to the younger generation that you watched grow up and get their take on life and the world.  They moved to St Louis from Laramie because his wife is doing very well in an internet based tutoring start up but she had to work.

October 8, 2017
We called the Mel Price Lock just below our marina first thing in the morning and they said if we could get there in ½ hour they would put us right through so we scrambled and got there in time.  The Mel Price Lock handles 1/3 of all the grain in the world on barges through St Louis!!!  And these barges are getting twice as big as the ones on the Illinois River. 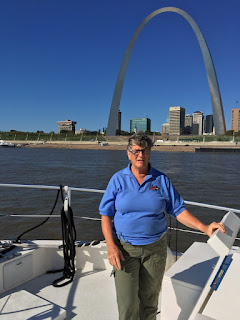 We cruised by the Arch and past lots of barges and tugs and made it to Hoppie’s Marina in time to visit Kimmswick, a wonderful little  19th century town with lots of shops and the Delta Queen (not a boat) for lunch/dinner.  John biked over to the Mastadon State Park where they first discovered Clovis points next to mastodon bones.  Pretty cool, but too many neat little shops to miss.

That afternoon about 6 more boat had made it to Hoppie’s, the last stop for fuel until Paducah and we all got the benefit of a briefing from Fern as to the dangers and adventures we faced on the Mississippi to Cairo and up the Ohio to Paducah.

Posted by Colorado Cowboy Afloat at 10:00 AM