Looking for some warm

October 24-27, 2017
The next section of the trip is 200 miles down the Tennessee River.  A very picturesque journey but another of John’s green tunnels.  Actually the first day was mostly on Kentucky Lake behind the Kentucky Dam.   This looks like a really big boating area, kind of like parts of Florida, but it was really cold and while we were freezing on the boat, most of the other boaters were inside.  The wind was blowing enough to create a little chop on the lake but not too much.  We got in late to Paris Landing State Park Marina.  A very nice facility built by the state of Tennessee but not much to do, or restaurants this time of year.  I went for a walk and then cooked dinner.  Nice lamb chops from our friends on the Ohio.
Got started next morning and got as far as Cuba Landing.  This marina had some people around when we got there, but it was really out in the middle of the Tennessee Natural Wilderness area and pretty well closed down for the season.   I went for a bike ride, a pretty hilly 5 miles and got my blood running and warmed up a little, but it’s hard to make up for high 30’s in the morning and mid 50’s all day.
Next day another 50 miles to Clifton Landing.  This was more fun since about 6 Looper boats were here and the little restaurant was still open and we were docked 25 feet from the door.  Sat around and had beer and hamburgers with the other Loopers.  One was Bill Hauskins from Glenwood Springs who we had run into up on the Illinois.


Starting out early on Friday we are hoping to make it to the last lock on our trip on the Tennessee, but we are running into current and not making very good speed.
Made it to Aqua Yacht Harbor after 1.5 hours at the lock below Pickwick Lake, at 5:30 in the rain.  But our friends Terry and Dorothy on Magic were already tied up.  They invited us for some Scotch and I brought the rest of a bag of popcorn.  We hadn't seen them since Portsmouth and we had fun comparing notes about our trips.

October 28, 2017
John's golfing partner from Colorado, Wayne Perkins came up from Aberdeen, MS where he retired after Colorado and we went for a tour of Shiloh Battlefield National Park.
It's been impressive to we some of these battlefields and get a feel for how the battles played out across the landscape. 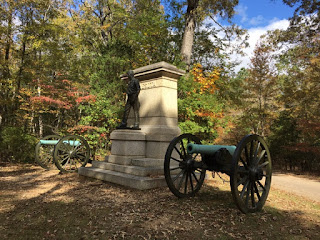 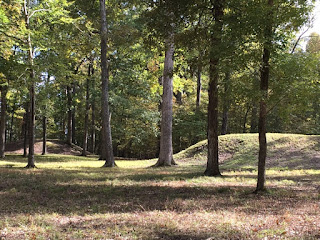 At the same spot they have discovered some indian mounds of the Mississippi indians from 1300 and have done a good job of excavating and interpreting their finds .
Dinner at Freddie T's.  Recommended by Wayne's friends and pretty good with an impressive wine list for a mostly dry state.

Posted by Colorado Cowboy Afloat at 9:18 AM