Huck Finning on the Mississippi

October 9, 2017
We tried to take off early for a long day but the river was socked in with fog so we didn’t get started until about 10.  This time we caravanned with three other boats, Miss Lily, State of Bliss and ChaCha all headed at about the same speed to the same place, anticipating anchoring out.  Fortunately we were head down stream and were making 10-11 knots!!
We pulled into a lock just off the Mississippi on the Kaskaskia River and were able to tie  up on the wall below the lock so we could get off the boat and walk around.  A neat Pilgrim boat, Miss Lily invited us all to dinner of a great crock pot roast.  I brought a salad and they were set up so 9 of us could sit around a table in their cockpit.

October 10, 2017
Still on the Mississippi, not too interesting, or as John calls it a great green tunnel.  We anchored in the Little Diversion Channel with three other boats that had passed us during the day, but we had caught up to by evening.  This is really a tortoise and hare kind of scenario.  The difference between 7 nm and 10 just means the others get there sooner, but there are only so many places to anchor along any stretch of the river.  In order to fit all the boats in the area, there were now 7 or 8 we were showing off our shallow draft and headed farther up the channel, but forgot about our height and clipped our antennae on a bridge.  No damage, just a good reminder about everything we have to think about.
Being on a small channel off of the river I got out my kayak and headed out in a cloudburst.  But since it wasn’t cold being wet didn’t make too much difference.
Cooked dinner on the boat and fell asleep to the rain pounding on the hatch over our heads.

October 11, 2017
Up early we headed off for a long day.  Came off the Mississippi at Cairo and headed up the Ohio.  When we started this trip I hadn’t realized how little mileage we put in on the Mississippi.  We could have continued down the Mississippi, but it is about 750 miles farther from Florida that way and there are no recreational marinas, lots of huge barges and nothing but a very wide channel with vegetation on the banks.  All of the trip on the rivers has been somewhat like that.  The rivers natural flooding up to 30’ change in a year, and the real floods up to 50-60’  have moved all civilization back from the river banks. The locks on the rivers control some of it, but they have given up below Cairo on the Mississippi and the river goes where it will.  There were not even any recreational docks in Cairo, through there were tugs and barges parked everywhere, taking on cargo and waiting for locks.
Our first encounter with the infamous stretch of locks on the Ohio was at Olmstead Lock.  This is a lock that has been under construction of 20 years and is billions of dollars over budget.  It is supposed to replace lock 52 and 53 which should have been replaced 40 years ago.  These locks are actually used to raise the water level in the river in dry seasons to facilitate navigation all year round.  They have wicket dams made of timber (80 years old now) that they raise a lower when needed.  Needless to say they are a mess and always needing maintenance for just not working.
When we got to the locks the remnants of Hurricane Nate had dumped a lot of rain the the Ohio watershed and the river was too high to use the locks, but instead of lowering the wickets to just let the boats go through, they were making everyone wait till the water went down.  Probably worried that they wouldn’t be able to get they up one more time.
They were letting pleasure boats through the lock under construction and over the wickets of lock 53, so we only had to wait and hour or so for our escort boat through the area.  But it was getting really dark and we headed for the closest safe anchorage about Lock 53 at Bean Branch Creek.  Pretty quiet and not too much rocking and rolling from the wake of the barges.

October 12 - 13, 2017
We only had 10 miles to go, since Lock 52 was closed but we moved up to Metropolis, the hometown of Superman, and anchored with some other boats at a spot where we could get out our dinghy and go to a boat ramp.  Using the dinghy is always an option when we anchor, but the banks of the rivers are so muddy, getting out and going for a hike is not really an option.   It is really hard for Loopers who have dogs on their boats that they have to get off at least once a day. 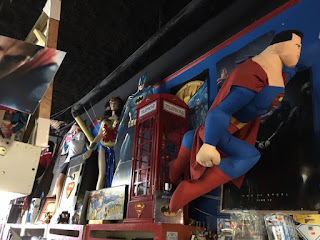 John had to find a notary and then Post Office for some documents he had to send off, so I went to the Super Museum.  An amazing collection of memorabilia from Superman comics and the TV show.  They had the sling that he flew in.  Things have really changed in special effects in the movies.  We got back to the boat pretty quickly, we’re not really comfortable leaving the boat with no one aboard. 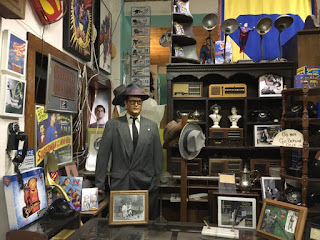 Though the trip from St Louis  to Cairo on the Ohio is a very historic one,  there wasn't much to take pictures of till we got to Metropolis

Not knowing when we would get through the lock, some people had been waiting for two days when we got there, one boat decided to head into town to rent a car and go back to St Louis. We were only three hours by car from their home.  Since they didn’t have a dinghy John ferried them in, but they said the fire department would have come to get them.  They cleaned out their freezer and gave us some good stuff for a few dinners.  We spent the night off of Metropolis and were settling in for the weekend on Friday watching the water level, when we got the word that they thought the water would be low enough on Saturday morning and they would let any pleasure boats that were anchored below the lock through first thing in the morning, so we headed up about 5 miles and anchored for the night with about 12 other boats.

October 14-15, 2017
First thing in the morning was about 9 am but they got all 13 boats into the lock (actually they could have gotten twice as many in) and up we went 3 feet to finish our trip on the Ohio.   We passed Paducah where we have wanted to go because it’s a neat little town with the National Quilt Museum, but we’d been on the Ohio long enough.  There are two ways to Kentucky Lake.  Either turn off on the Tennessee River at Paducah and go the commercial route, shorter but more barges to get through the next lock, or go up to the Cumberland River which is more recreational and not usually too much traffic at the lock into Barkley Lake.  But since the barges weren’t going anywhere on the Ohio, when we called the lock they said, no problem, no wait so we took the shorter route and got to Green Turtle Bay.
It’s a lovely resort, marina with a cute little town and restaurant and a good mechanical repair shop.  Had lunch/dinner at the Thirsty Turtle at the resort.  Great variety of grilled cheese sandwiches.  Next day we got out our bicycles just to get to the ship’s store since it was a huge marina and we were twenty five yards away across the water and a quarter mile walking.  They area was pretty hilly but we went into town for some groceries and dinner at Patti’s 1880’s Settlement.  It is an infamous restaurant, decorated on every square inch inside and out for Christmas with good pork chops and bread baked in a flower pot, and 15 different homemade pies to choose from.  Out in the middle of nowhere, in October, it was packed with waiting times up to half an hour.

Posted by Colorado Cowboy Afloat at 8:30 AM