October 16, 2017
Our generator stopped working while we were anchoring out, not too good for life on the boat so we needed a mechanic to look at it.    We had called ahead hoping to have someone look at it to see if it was a simple fix, on Monday, but when no one had showed up by early afternoon, I stopped by and did my dumb wife, please help cause my husband might just be doing something like not pulling the right switch routine and Jeff came over.  There was more to the problem, but by this time we had decided to rent a car and do a week’s road trip to Tennessee, Kentucky and Ohio.
Enterprise Car Rental came out from Paducah to pick me up with three other boaters needing cars and I got to go into Paducah after getting the car to see the National Quilt Museum and the old town area of Paducah that had lots of restaurants and shops right on (40 above) the river.

We headed out of town with the idea of trying a road trip the way we had been doing the boat trip, on the backroads,, through small towns.  Our first stop was Hopkinsville where there was a neat little local craftspeople shop and a wonderful hardware store with all the old furnishings lining the walls with shelves and drawers full on nuts and bolts and hardware, accessible only from ladders that slid on tracks along the walls.

We made it to Nashville in time for a lunch at an old comfort food restaurant in Germantown where we ate at family style tables with the other customers and passed the bowls of food around.  There was two kinds of salad, coleslaw and pea, pot roast, fried chicken, corn pudding, mashed potatoes, green beans and brownies for dessert.  All for $15 each!
A short driving tour of the downtown and Honky Tonk street and we got to our motel in time for a short nap before going to the Grand Ole Opry.   Neither of us are country music fans and didn’t really know any of the performers, but it was fun to see it once.  It is really a radio broadcast, so between the acts there were commercials! 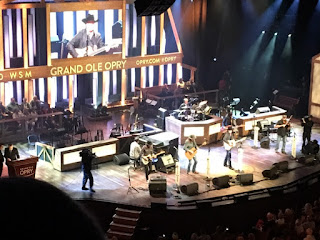 October 18, 2017
We tried to see the Hermitage, Andrew Jackson’s home, but it is a private museum and you can’t see much without taking a tour so we kept on going.  Took the scenic route over the Cumberland Plateau which got us up about 1,000 feet for a little view, but still mostly trees everywhere and lots of tiny little wide places in the road they can towns.
We made it to Chattanooga in time to catch the DUCK tour.  These are old refurbished army amphibious vehicles that head down the street from their parking lot and then down a very steep boat ramp at 40 mph and splash into the river.  A humorous captain gave us a tour of the city by boat and some interesting history.
We actually saw a Looper boat docked at the marina, a long trip by boat. 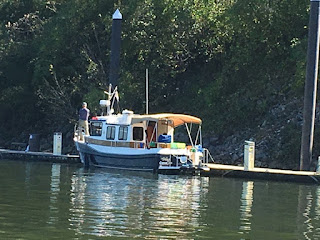 We had a snack afterwards at a downtown sports bar with about 40 beers on tap and went on to Knoxville.

Had dinner at a great Scottish Pub, rode the trolley around the downtown area and then went to a sports bar along the river (Tennessee) for a night cap.  They were broadcasting the coach of the Tennessee Volunteers team, recapping the season and commenting on the upcoming game against Alabama.   The Volunteers stadium is right in downtown Knoxville.

October 19, 2017
We were both eager to see Oak Ridge, Tennessee, one of the sites of the Manhattan Project.  John’s aunt and uncle had worked there during the war.  Most of the houses from the Secret City are still lived in.  They were building them at the rate of one every 30 minutes in 1943.  The museum was interesting and I learned some stuff I really didn’t know about the atom bomb production.  They didn’t have a bus tour the day we were there so we didn’t get to see a lot of the production sites. Most of them have been updated and are still in use for different research in nuclear power.  We went on a self guided auto tour but didn’t see much except to get an idea of how big the whole area was that they build from scratch almost overnight.  We finished they day by driving up to Lexington, KY.  We stopped in Danville to see some historic buildings downtown and see one of the earliest settlements west of the Alleghenies after they opened up the Cumberland Trail.  Had a flight of bourbon at an interesting restaurant and market.   I keep trying to like bourbon, but this was some good stuff and I still don’t like it much.  Give we Scotch any day.  My dinner was a grits cake covered with a gravy made with country ham.  Salty, tasty but " when in Rome".

We thought we had enough time to play golf of Friday, so we booked a tee time at the University of Kentucky (Big Blue) golf course.  Unforturnately we started behind a corporate group of never evers who were playing a scramble.  Really nice course, but we had to quit after 14 holes to make it to Centerville, Ohio, for dinner with John’s cousins Carol Lee and Bill Herrick.
We had a nice visit with them and dinner at an authentic Lithuanian restaurant.  The names of the dishes were familiar German ones but they didn’t really taste the same.
October 21, 2017
A short drive back west and we were in Chincinati at the Findaly Market to visit with my nephew Ben Gagne and his son Lucas.  We collected different kinds of food at an amazing market and then took the electric trolley to a great park where Lucas could run around and we could visit.
Cincinati looks prosperous and Ben seems to be doing well. 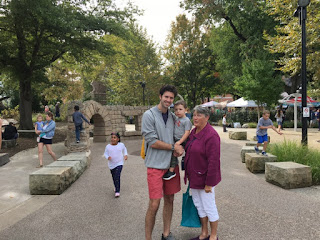 After sending them off for Lucas’s nap we were off to Louisville and dinner with John’s cousing Pete Leonhardt and his wife Delores.  Good to catch up with them.


More golf as we met with another cousin Mark Leonhardt and play at Fuzzy Zoeller’s course in Indiana, north of Louisville.  Mark is at least as golf crazy as John.  Ended up in Franklin, KY that night so we could play Kenny Perry’s golf course at the crack of dawn and still get back to Green Turtle Bay on Monday.  Kenny Perry is John’s hero and he has always wanted to play the course. Unfortunately we ran out of luck  weather wise and we started in the rain, I quit after 5 holes, John finished nine and we packed it in. 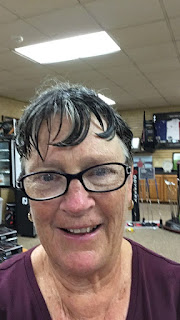 Got back to the boat  with a generator working and new pipes for the plumbing system.   I got groceries and returned the car and we were back on the boat. It was only when we went to bed that we realized the hatch above our bed had leaked in the rain while we were gone so we had to dry the sheets before we could go to sleep.  But our trusty dryer did the trick and we got a good night’s sleep in our own bed after our road trip.
Posted by Colorado Cowboy Afloat at 8:59 AM