The beginning of the end

October 29-31,2017
Wayne stayed the night and we took him on a short boat ride the next day around the Pickwick Lake.  We watched the golf tournament that afternoon and then after Wayne headed home we went to dinner at the restaurant at Aqua Yacht Harbor with some of the other Loopers who were at the marina.
Monday morning I did chores, laundry and grocery shopping, and John met with a mechanic to check out a vibration he had been feeling in one of the engines.  Mechanic diagnosed some simple shaft realignment and was able to take care of the problem.   Unfortunately not many of the marinas and roads around them, along the Tennessee, have been very bicycle friendly so we depend on the curtesy cars at the marinas for running errands.  But I get plenty of exercise walking up and down the docks in some of these marinas where it can be a half a mile to the dockmaster’s office or to the bathroom.
It had turned really cold, nights in the 30’s so we were eager to head south.  We can stay pretty warm at night under three layers of blankets, but even with the boats heaters, which are really reverse AC it can be pretty cold on the boat.
Tuesday we started on the Ten Tom Canal.  It was completed in 1985 to link the Tennessee river and the Tombigbee River to shorten the distance to the gulf.  The route down the Mississippi that comes out in New Orleans is much longer and congress was finally convinced to make the short cut.   These were the newest and best locks we have had to deal with, but still a lot of locks! We made it through three locks and fifty miles to Midway marina in Fulton, TN.  We got in early enough and it looked promising for a bike ride so I headed out.  It was steep getting up off the river but there was a nice bike path that I took for a couple of miles.  It is part of the Underground Railroad Bicycle Trail.  Hadn’t heard of that before but it looked like it headed up through Tennessee and Kentucky to the Ohio. 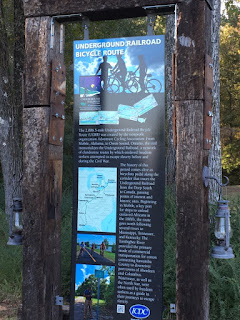 Posted by Colorado Cowboy Afloat at 8:01 AM