Nov 10-12, 2017
Left for New Orleans.  John and I hadn’t been there for about 30 years so it was interesting to see.  We took the route that we would have been on the boat, along US 90 and stopped at some of the little towns along the way.  In Bay St Louis we found a wonderful museum at the old railroad station.  Some history and some wonderful Mardi Gras costumes.  I didn’t realize that all of the little towns along the coast all celebrate Mardi Gras with costumed floats and parades. 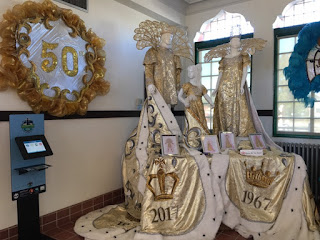 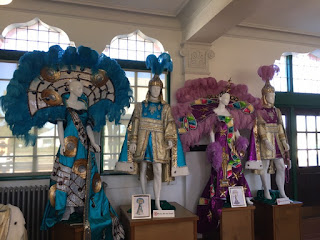 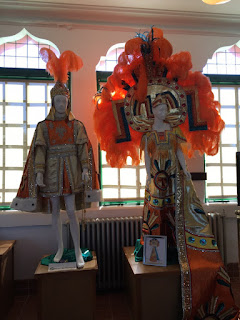 And the art work of Alice Mosely.  A sort of Grandma Moses of Mississippi.  She was a school teach who had led a very interesting life, reflecting the economics of the gulf coast in the 20 century.  Her paintings are primitive, but colorful and really humorous.  Continued our way in, crossing the Gulf Intercostal Water Way and found a great restaurant Le Couchon in the business district and had an amazing lunch/dinner of all things pork, and some oysters too. 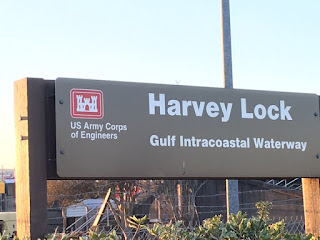 I insisted that we find the Harvey Lock which is mile 0 on the GIWW between the Mississippi River and the canals through New Orleans.  Had a great hotel with two TVs for the night.
Saturday I go up early and found a French bakery restaurant and brought quiche, croissants, French toast and lattes back for breakfast.
We played golf at TPC Louisiana,  a very nice track, with two locals.  Neither of us played very well but got some exercise.  The course had been under 8 feet of water for 45 days after Katrina.
Dan and Suzanne and her mother had flown into New Orleans on their way back to Pascagoula.  So we met them for dinner with her brother Chris and nephew Phillipe who live in New Orleans.  They chose a very representative New Orleans restaurant right across from the huge City Park.   I had a drink called a Sazerac, invented in NOLA in 1838.   Good food at Ralph’s on the Park.
Sunday morning we headed to the French Quarter for Mass and breakfast. 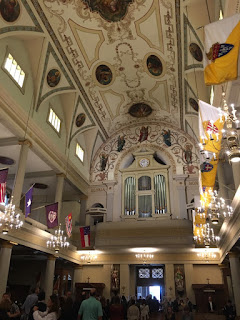 I went to Mass at the Cathedral Basilica of St Louis in the French Quarter and then we went to a Jazz breakfast brunch at the court of the Two Sisters. 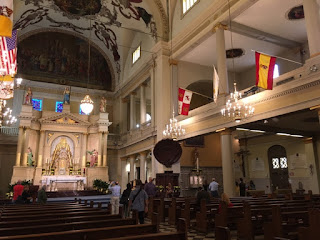 The cathdral is right on the river and I got a good view of where we would be if we'd made it by boat.

Then across Lake Ponchatrain on the Causeway Bridge and east on I 10 back to Biloxi in time for the weekly PGA tournament and a walk on the beach. 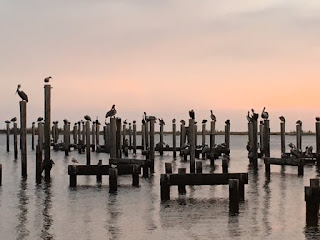 Posted by Colorado Cowboy Afloat at 8:50 AM