Finally left Ft Myers on Thursday March 2 and made it to Goodland, just south of Marco Island about 40 miles.  Unfortunately we were just ahead of a big blow with 25 mph winds and 6 foot waves in the gulf of Mexico.  John says we won't sink but we might wish we had.  Think bathtub boat with 4 year olds playing.  We ended up staying for four days.  Beautiful spot and access to Marco Island by bicycle.  But riding in with the wind was one thing, back to Goodland was something else.  But Uber will pick you up with a bicycle.
Goodland prides itself with on being the spring break capital for the Social Security set.  A thousand people were at a bar listening to music on Sunday.  Of course for the SS set it all starts about 2 pm.
The end of day 1. 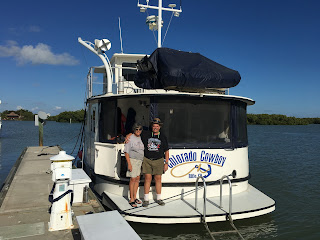 Posted by Colorado Cowboy Afloat at 11:47 AM