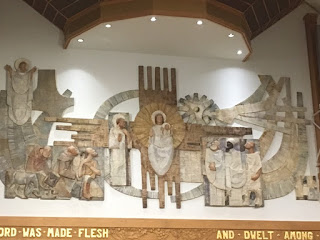 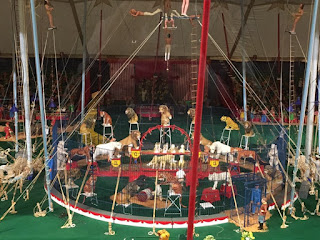 Dec 4-7
Still trying to keep the horse from running all the way back to the barn and we had never been to Sarasota so we had a short ride across Tampa Bay to our nest stop at Marina Jack’s.  this was a really fancy marina with some huge boats.  We knew we were back in south Florida.  Met up with some people we had been tag teaming since Mobile.  Their problems in Clearwater with a transmission had turned out to be something more serious than the oil and their “buddy boat” had waited for them.  Some boats on the Loop seem to buddy up with another boat and make plans and travel together.   We have enjoyed meeting people and socializing but never got really buddy with anyone.  Maybe our focus on golf has precluded some of that.  It was finally warm enough in Sarasota to feel like making Pina Colada’s for sipping on the dock.  I still had the stuff I had bought in Ft Myers in February!   So I made a pitcher and invited our neighbor boats. Nice evening on the dock.
First day in Sarasota we got the parts we needed to fix our generator but after looking at the situation John decided to get someone to help put them in.  Fortunately the marina had a good service department and sent someone over that day to check it out and he came back the next day and did the work.  I walked into town and checked out Sarasota’s “historic” downtown.  Not to historic but a nice downtown for eating and a little shopping.  A great bookstore.   I like to support Indie bookstores and added to my collection that I’m going to have to get rid of next week.  I found a neat old section of houses built in 1910 hidden among the skyscrapers.
Wednesday we headed up to to the Ringling Complex.   Donated to the City of Sarasota after Ringling died in 1936 it has a big park/garden area around their home on the bay, Ca’d Zan complete with a marble dock, the Asolo theater, built in Renaissance Italy that was taken apart and shipped to Florida early in this century, the John and Mabel Museum of Art, and of course a great circus museum.  A complete history of the circus from the Romans to Cirque du Soliel and lots of artifacts from the circus was interesting but the most amazing display was a miniature circus that Howard Tibbals has spent his lifetime creating.  For those of us born after the heyday of the “Big Top coming to town” it really brings the event to life.


The art museum has incredible old masters and a wonderful Asian section that we explored.  We could have spent all day there, but John’s knees and my ankle can only put up with a few hours of museum wandering.
That evening we went back to the old area I had discovered for dinner at Owen’s Fish Camp.  I have finally gotten to the point on the trip where it takes more than just good food for me to go out to eat!!  I need a special atmosphere, and this provided it with a garden with all sorts of fish Old Florida  memorabilia and live country music where you drink and eat appetizers while waiting for your table.   And all within walking distance of the boat.

Thursday John had discovered the Bobby Jones Golf course so we went out to play.  One of the first courses in Florida, designed by Donald Ross in 1926 and dedicated to Bobby Jones the next year.  Fun layout with lots of water and a good round. It is a municipal golf course and didn’t have much to offer for lunch so we went back to the marina and had lunch on the deck of Marina  Jack’s Restaurant.  The marina is in a park so I took a short walk around to the bay side of the park that evening and watched the sunset. 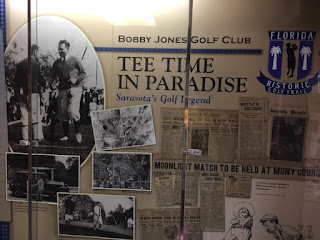 Dec 8-9
Friday we headed down to Venice.  A city we had been to while looking for a boat and I had really liked.  The old town on the island has stayed the same for a century but is pretty lively with restaurants and shops and I enjoyed a look around since it was just a ½ mile over the bridge we we docked under.  Dinner at the restaurant at the marina was simple since I was not in the mood to cook.
Saturday we were scheduled  to go to Boca Grande schedules and boats don’t mix. The weather was really bad and the wind blowing hard so we cocooned inside the boat.  I ventured out and walked to Mass in the late afternoon and got back to the boat to cook dinner. 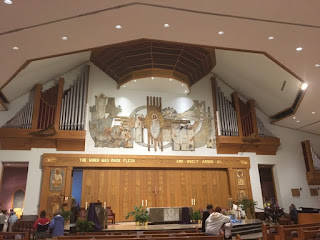 Posted by Colorado Cowboy Afloat at 5:59 AM