August 2, 2017
We weren’t in a big hurry to get going so I rode back into town, got lost and climbed some ugly hills but found a latte, smoothie and pastries for breakfast. John is riding his bicycle a lot and getting pretty good at hills, but as we have come farther north, the flat trails along the water have given way to hills up out of the valleys and aren’t as much fun.  We got to Henry’s, a famous restaurant along Georgian Bay, on Frying Pan Island, that had closed the week before but had a very small but good dock for the night.  I got to go for a kayak ride and a guy that we had passed in Delaware Bay 6 weeks back stopped by to talk to John.  Our boat and its name are not easily forgotten once someone has seen them.

August 3, 2017
Georgian Bay is famous for beautiful secluded anchorages, but I am beginning to realize that I like marinas where I can get up and walk to a latte better, and these are few and far between.  Lots of people out for weekends on their day cruisers and one we met in Midland had recommended Gilly’s in Snug Harbor.  When we called they said no problem to our docking but when we got there we figured we could get in but probably not get out again.  So we went out in the bay a little, dropped the anchor for the first time since the ICW and launched our dinghy to go in for lunch.  It worked well and lunch was great.  Pan fried Pickerel (Walleye) and Whitefish.
August 4, 2017
We headed west, not sure how far we would go since the wind was picking up.  After navigating a well-marked but tight and winding channel in the open water we headed for Bayfield Inlet for the night.  We went by Pointe Au Baril light house and a replica of the barrel that they used to place a lantern on to guide boats up the channel.  I'm really glad we have GPS and digital charts!! 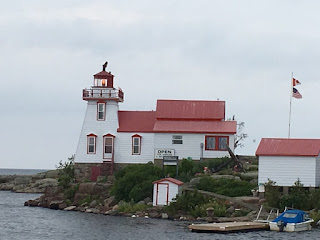 Tight channels between rocks with trees are one thing, but a tight channel in the open water, marking the rocks you can’t see is something else, especially when the wind is blowing and the boat harder to control.  We got a little out of the channel at one point but a boat going the other way warned us to get back to the markers and kept on us till we were back in the channel.
Bayfield had a dock big enough for us but not much else. I got out the kayak and toured the harbor.   Wandered through some beautiful lily pads still in bloom with standard white lilies and a different kind of yellow ones.

As the wind continued to blow and the rain started we decided to stay at the dock for the next day.

August 5, 2017
John had come down with a cold and it continued to blow and rain all day so we stayed in our sweats and watch the Women’s British Open and the Bridgestone all day.  I got out for a walk later in the day as the storm moved out but in trying to get my kayak back on the boat I dropped my glasses into the water.  John had done that in Herrington Harbor in Maryland, and one swipe with the fishing net and picked them up.  Unfortunately this water was a little deeper, and even getting in with my swim mask I couldn’t find them in the grass and mud on the bottom.


The wind was down but we were tired of Georgian Bay and there really weren’t any marinas left so headed out across the water 50 miles to Killarney at the start of the North Channel.  A little bit of rocking and rolling kept me up on the bridge the first few hours, but it calmed down and we pretty smooth for most of the 6 hours.  There isn’t a lot here in Killarney, but there’s lots of room for big boats, a couple of restaurants, a coffee shop for lattes in the morning and a big enough town to get a pretty good bike ride in.  I went to mail Laila’s birthday card, but since August 6 is Canada Day, the post office wasn’t open.   John’s still not feeling too good so we’re staying here for tonight and we’ll head out tomorrow.  We’re actually not very far from Detroit and I thinks a lot of the boaters are from that area.  I stopped at the little Catholic church and there was a dedication plaque in gratitude for help building the church to the Detroit Yacht Club.

I thought about going to the inn at the marina for an after dinner drink, but opted for the view from our bow and the scotch I got in Charleston.

Posted by Colorado Cowboy Afloat at 9:59 AM